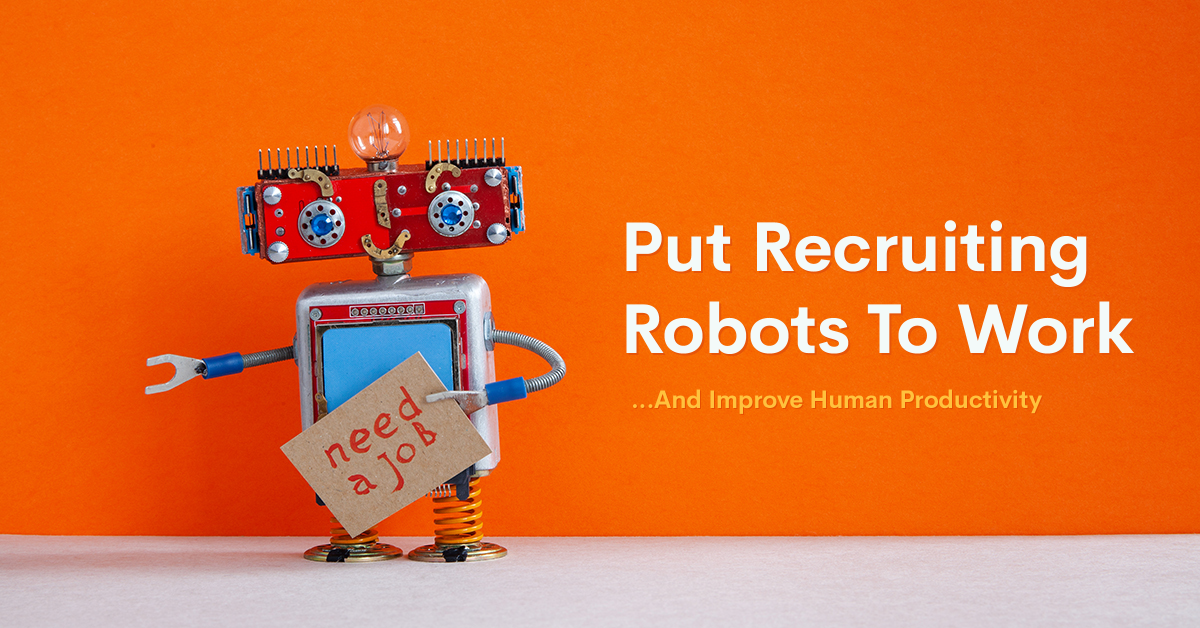 You wander into your recruiting office and iRecruiter 7.0, a glistening, human-shaped pile of metal and machinery, sits tapping away at a desk, taking calls, sending messages and generally connecting candidates with clients.

Its eyes turn red, and so begins the extinction of the human race.

I blame our current dim view of a robotic future on Hollywood. It can be difficult to separate the likely reality from the film-based fiction. As such, opinions seem to oscillate between ‘they’ll take all of our jobs’ and ‘they’ll kill us all and turn us into batteries’.

Whether your personal view leans towards a robopocalypse or not, the one thing that you can be sure of is a robotic future is coming.

Robots are already infiltrating the recruiting industry, just not as Michael Bay, Steven Spielberg or Stanley Kubrick may have led you to believe.

In fact, rather than taking our jobs and enslaving the human race, the robotic future, for those who do it well at least, is looking particularly rosy.

Why does recruiting need robots?

The way to win at the recruiting game is to build strong relationships, outperform your competitors and work smarter, not harder.

The same recipe for success has been around for centuries. There’s no shortcut, it’s simply a matter of putting the right people, process and technology in place. The Romans had the catapult and Henry Ford had the assembly line.

When it comes down to it, we humans are, well… human. And humans have limitations that robots do not.

The average worker spends 8 hours per day or 40 hours per week at work. Indeed, this amount of time wasn’t settled on by science, but rather on labor advocate Robert Owen’s 1817 slogan of “eight hours’ labour, eight hours’ recreation, eight hours’ rest” that aimed to relieve textile workers and coal miners of the often 16-hour days that they were forced to ensure.

Many actually assert that a four hour or even three hour day are all our minds and bodies are capable of, if asked to perform at their peak.

When you compare the available amount of time in a week – a healthy 168 hours – these numbers look particularly tiny.

As a recruiting professional you understandably wonder what can be done with all those hours that lay unused. Well, an ever-increasing group of your colleagues are settling on a one word answer: robots.

Far from the humanoid piece of machinery that Hollywood sells, recruiting bots are instead made of zeroes and ones, existing purely on the digital plane.

For the moment they are designed to automate those recruiting tasks that are simple, manual and all too often forgotten. Recruiting robots are able to automate these basic and repetitive tasks, leaving the human recruiter to focus on higher value work – building candidate relationships, servicing clients and generally pushing the business forward.

Picturing a recruiting robot is therefore difficult. Hidden within smart software, they go about their business in a far subtler way than their movie counterparts. A recruiting bot is nothing more than an ultra-clever piece of code that is available 24/7 – 365, automatically doing whatever tasks it’s capable of.

The next question is obvious: what are some of these tasks?

When it comes down to it, we humans are, well… human. And humans have limitations that robots do not.

How robots can improve recruiting productivity

As recruiting bots get smarter, the list of tasks that they are capable of grows. As an example a firm might use bots to take care of the following jobs:

While far from comprehensive – a more detailed account of recruiting automation examples can be found here – this list gives you an idea of the potential of recruiting bots in taking care of the basic while you focus on the complex. For the most part these tasks could be labelled as one or both of the following two things:

Far from taking our jobs or annihilating the human race these bots will instead be the ever-alert personal assistant, taking care of the boring and leaving you with the recruiting excitement.

So while you shouldn’t expect iRecruiter 7.0 to be tapping away at the workstation next door any time soon, you can expect far less conspicuous bot to be taking care of future recruiting business.

Experience As Your Competitive Advantage In A Candidate Driven Market
Using Technology for Growth
5 Strategies for Sharing Truly Valuable Content with Your Candidates
Bullhorn GRID Reveals Automation, Engagement as Top Industry Concerns for 2019
The Digital Transformation in Staffing