Textual Healing: How To Add Text To Your Recruiting Mix 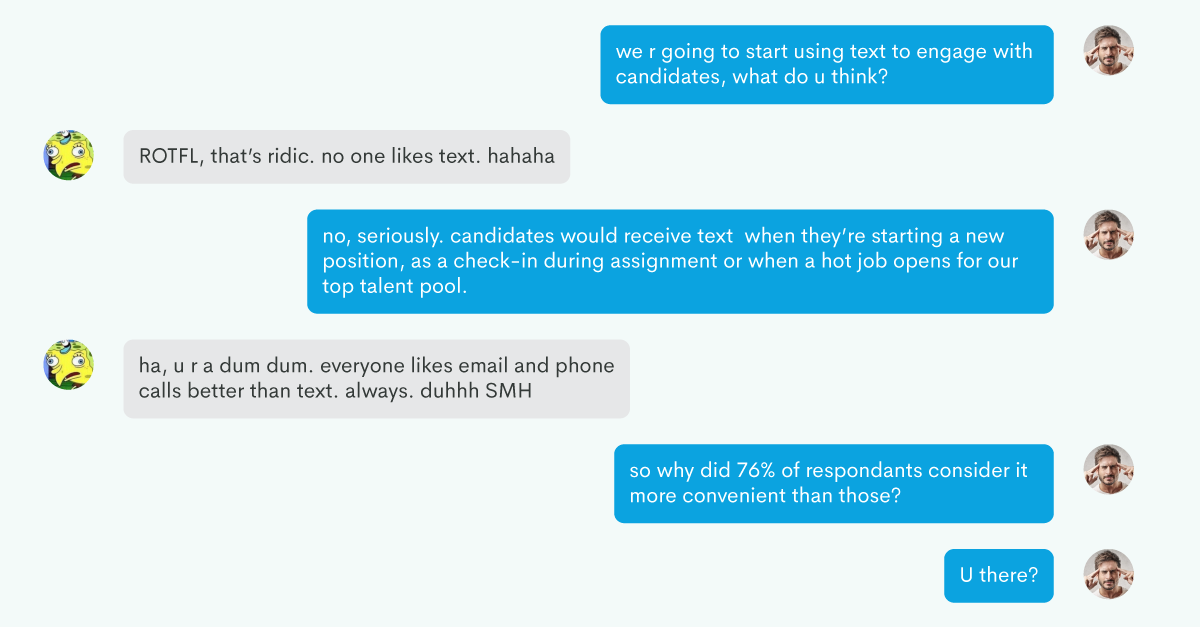 You call, but it’s screened. You email, but it’s either snatched by the junk mail folder or lost within the 32,675 unopened messages in the candidate’s inbox. You send a message on LinkedIn, but the candidate hardly ever checks the platform. What’s left? In reality you’re down to snail mail, carrier pigeon or text messaging.

“Texting? Isn’t that a bit invasive? Won’t that get on people’s nerves?”

This is a common thought for the modern day recruiter. For some reason texting is seen as holier-than-thou – somehow far too personal and intrusive a form of communication for a recruiter to use to contact candidates.

But it’s high time we rethink text messaging as a recruiting and staffing tool. The numbers are in, and they make a particularly compelling case for using texting in your recruitment communication mix.

The problem with traditional candidate communication

Calls and emails form the backbone of most firms’ candidate communication and engagement efforts. But there’s a problem.

Be it a generational thing or simply today’s ready access to alternate forms of communication, a large chunk of candidates aren’t that fond of phone calls. They can be inconvenient – in essence the sound of a phone ringing is the equivalent of someone yelling ‘TALK TO ME’ over and over again until you either choose to accept or politely decline the invitation.

Another inconvenient truth is that around 75% of candidates (and often more depending on the field) will be sitting behind the desk of their current job when you call. Candidate Dave isn’t exactly going to be open and honest with his recruiter when his current manager is hovering over his shoulder. Don’t get me wrong, phone calls have their place. But sometimes there’s a better way.

Texting is the perfect medium to share logistical details with a candidate – confirming interview times, giving directions and acknowledging the receipt of important documents, to name a few examples.

For the longest time, that better way was email. It gave candidates a level of convenience and discreetness that calls simply lacked. But over the years email has fallen prey to its own popularity.

Everyone wants to use it, so people get a lot of it. According to one Canadian study, the average office worker receives no less than 121 emails a day. Add to that the multiple personal accounts that most of us own, and you’ve got a veritable avalanche of dispatches cascading into a candidates’ inboxes every day. Once again, email has its place – particularly if it’s done well – but for certain types of communication there is a better option.

That option is text.

For those that have grown up with it – millennials and the generations that have followed – texting is comfortably the most popular form of communication, far above phone calls, emails and even social media. 76% of respondents to this OpenMarket survey labeled texts ‘more convenient’ than other forms of communication. And recruiting-specific research backs up these broad claims. In a survey of 1400 candidates aged 18-30, 86% felt positively about text messages being used during the interview period.

So it’s a preferred form of communication for candidates, that much is clear. But the true value of texting is in its open rate. Imagine a world in which 90% of your outbound emails are read within three seconds of them being received. Incredibly, according to the Mobile Intelligence Review, that’s exactly what texting offers.

This instant and all but guaranteed communication is perfect for candidates. Hourly and entry level workers can be instantly asked whether they are available for work, and VIP candidates can be delivered the latest and greatest openings as soon as they crop up. It’s also perfect for current contractors – you can gather feedback and send reminders to the likes of nurses and other high-volume workers who are constantly short on time, and non-desk workers who don’t have ready access to email.

This isn’t to say that texting doesn’t have its limitations. Messages must be short and to the point, and overuse will see the medium becoming ineffective. So in an effort to refine and polish your firm’s texting strategy, let’s take a look at a few of the dos and don’ts of candidate texting.

Gain permission: As a general rule, people don’t give out their mobile number as readily as their email. This is much of the reason why texting is such a trusted medium – your phone number is for your real-life contacts, your email address is for (almost) anyone else. Abuse that trust and you can kiss the effectiveness of texting goodbye. It’s imperative that you gain a candidate’s permission to send texts – that way you can be sure that they won’t be ignored.

Use it sparingly: But even after gaining a candidate’s permission, you should only send texts for certain types of communications. Texting is the perfect medium to share logistical details with a candidate – confirming interview times, giving directions and acknowledging the receipt of important documents, to name a few examples. More personal messages like thanking a candidate for attending an interview or asking a contractor how they are finding their new position are also ideal for texts, provided they aren’t constant.

Be mindful of content: Succinct professionalism. These are the words that should be front of mind when crafting a text message. You want it to be to the point, and worded in a friendly, courteous and respectful way. You must read and reread your message before you hit send – the only difference between a contractor getting paid and a contractor getting laid is autocorrect. And there are obviously certain things that you never text – job offers and rejections, for example.

It’s all about timing: With 14% of candidates saying that texting outside of business hours is the most inappropriate thing that a recruiter can do, getting the timing of the message right is also vital. The same survey cited the first half of the workday (8am – midday) as the best time to receive a text.

Take a systematic approach: Continually engaging your candidates through text necessitates a methodical approach. You need to identify exactly which types of communication you are going to send and how often you’ll send them, and you also need the ability to measure and analyze the performance of this outreach. Every candidate is different, so there’s no one-size-fits-all solution to what, when and how often texts are sent. You need to use trial and error to find the right formula for your candidate base.

Screened calls, junked emails and unread LinkedIn messages are the bane of many a recruiter’s existence. And while text could be the tonic in many situations, it must be used with restraint in order to retain its effectiveness.

Treat your candidates and their phones with respect, and they’ll do the same for you. Treat them with disrespect, and you’ll be down to snail mail and carrier pigeons.

A Quick Guide to Maximizing Your Recruitment Referrals
Building A Candidate Nurturing Dream Team
The 7 Soft Skills That Separate the Great Candidates from the Good
5 Strategies for Sharing Truly Valuable Content with Your Candidates
Building Great Sales & Recruiting Teams: A Conversation with Tom Erb